15 Benefits of Cold Showers That Will Blow Your Mind 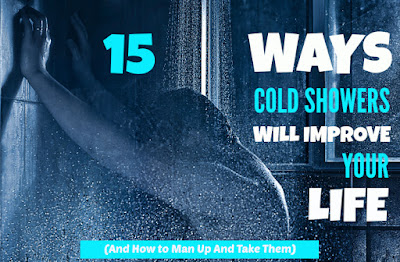 15 Benefits of Cold Showers That Will Blow Your Mind

Have you ever been so relaxed in a nice hot shower, only to be blasted by what feels like a sub zero devil water?

I know, it seems like your world has come to an immediate end.

But next time this happens, don’t be so fast to scream at your GF, and instead embrace the cold. Because this ice cold shower may be exactly what you need.

Cold showers have been proven to have an amazing effect on your well being and health. Something as simple as rotating the temperature gage can really have a big improvement on your life.

So in this article you’ll not only learn the 15 benefits of cold showers, but how to actually grow the balls to take them! Because it takes balls.

But before we go there, lets check out the 15 benefits of taking cold showers:

Out of all the other articles out there, no one lists this as a positive of taking cold showers, but I personally think it’s the most important. Cold showers build massive will power.

To a cold shower virgin, the amount of will power it takes to take cold showers may seem like that of a Shaolin Monk, because for the common man it is a pretty big jump.

Doing something you are so resistant to, every single day, right when you wake up, takes a lot of mental strength. And overtime, this mental strength and discipline will become an automated habit that echo’s into every area of your life. This is why it’s a staple of motivational blogger, Victor Pride’s, 30 Days of Discipline (Which is awesome BTW).

Do you get flustered, anxious or pissed off easily?

As shown in this study, cold showers act as a small form of oxidative stress on your nervous system. And overtime, the body adapts to this. Essentially, you will be a calm, cool, badass dude. The first time you step in that cold shower, you won’t be able to think straight, let alone breath. But after a month, you will be thinking about your day in a Zen like focus as the ice cold water has no effect on your manliness. This will translate into everyday life as you brush off stressful bullshit that would typically ruin your mood.

This can be viewed as an adaption to repeated oxidative stress, and is postulated as a mechanism for body hardening. Hardening is the exposure to a natural, e.g., thermal stimulus, resulting in an increased tolerance to stress, e.g., diseases. – Source

Think about James Bond. In the books, James Bond always takes what is known as a Scottish Shower, where he starts off hot and finishes with ice cold water. And he’s the calmest, coolest dude there is!

Along with increasing your adaptation to stressful situations, they will lower levels of uric acid, and boost levels of Glutathione in your blood – making you less stressed in general.

If you’re one of the brave souls that have taken a cold shower already, then you will know that at first it is hard to breath.

But don’t be scared. This extreme deep breathing, at 8AM every morning, is going to dramatically increase your oxygen intake & heart rate, resulting in a natural dose of energy throughout the day.

On top of the icy cold water, this deep breathing will leave you feeling alert, instead of a groggy zombie like your co-workers.

If your not motivated by feeling better, then be motivated by looking better
.
One of the best ways to improve your skin (and hair) is by taking cold showers. Plus it’s free!

According to certified Dermatologist Jessica Krant, ice cold water can help our skin by preventing it from losing too many natural oils. And your hair gets the same benefit.

Along with that, one of the benefits of cold showers is how they will help your hair appear shiny, strong & healthy by keeping the follicles flat and increasing their grip to the scalp. This is great news for any of you guys who are scared of losing your hair!

Another way cold showers will make you look better, is by promoting fat loss.

Most people don’t know this, but there are two types of fat in your body. Brown fat & white fat. White fat is bad. It’s the body fat that we all hate so much. Brown fat is good. It’s function is to generate heat and keep your body warm.

When you take a cold shower, brown fat is activated, resulting in an increase in energy and calories burned to keep your body warm. So much so that according to this study, cold temperatures can increase brown fat by 15X the normal amount, which can result in 9 pounds of weight loss per year.

Tim Ferris is also noted in his book, The Four Hour Body, that taking ice baths was an amazing way to promote weight loss. The next level for any cold shower veterans

One of the coolest benefits of cold showers, for men, is that they will cause a rise in testosterone levels.

How much is hard to say, but according to this study, heat (even in small amounts) has an effect on our DNA, RNA & protein synthesis in the male testes. Fun fact: This is why our balls hang outside of our body, to stay cool. This study backs this, showing that just 15 minutes of increased heat in rat testes showed a big drop in testosterone.

All that, and the fact that Russian weightlifters used to sit out in the cold before competitions, leads me to believe there is something to this cold shower and testosterone theory.

Another interesting benefit of cold showers is that they will boost your sperm count and increase fertility.

Taking hot baths has been proven to be an effective male contraceptive. Men who took a half hour hot bath every other day for 3 weeks were rendered infertile for the next 6 months!

On top of that, a study at USCF showed that men who stopped taking regular hot baths showed a sperm count increase of up to 491%.

While a hot shower won’t be as devastating on your sperm, it will have an effect. Remember, those testes want to be nice and cool, so if your trying to conceive – do them a favor and opt for cold showers.

And if you’re not motivated by feeling better, or looking better, then be motivated by being healthier.
Cold showers improve circulation by means of sending blood down to your organs to keep them warm. This stimulation of the circulatory system is great for your overall cardiovascular health.

One of the most important benefits of cold showers is the fact that they increase your immunity.

A study from England showed that taking regular cold showers increases the amount of disease fighting white blood cells, compared to that of those who take regular hot showers. The hypothesis was that the boys attempted to warm it’s self during the cold shower, resulting in an increase in the metabolic speed rate and activation of the immune system. This then leads to the release of more white blood cells.

On top of that, remember back to point #2 and how the cold water swimmers bodies were more adaptive to oxidative stress. (A.K.A, their bodies can take a hit)

11) And They Drain Your Lymphatic System

If you’re an athlete than you know that taking an ice bath after intense training is one of the best things you can do to recover faster. (A 2009 study confirms this)

But you don’t need a high tech training facility with cold water submersibles to be able to achieve these benefits. Just take a cold shower.

Although it won’t be as effective as a fully submersed ice bath, it will improve circulation, and help remove some lactic acid. Try alternating between very hot and very cold to let the blood come and go to the surface. Your muscles will thank you.

One of the most noted benefits of taking cold showers is that they offer relief for symptoms of depression.

Cold showers stimulate what is known as “the blue spot,” which is the brains primary source of noradrenaline – a chemical which plays a role in alleviating depression.

Plus the mild electroshock delivered to the brain by the cold shower (you’ll know exactly what I mean) sends an overwhelming amount of electrical impulses from peripheral nerve endings to the brain, which could result in an anti-depressive effect.  There is a high density of cold receptors in the skin, much more than there are for registering warmth

And according to this study, it’s not all just hearsay.

At the end of every shower, I like to just let that cold water blast me on the top of the head for as long as I can take it. Talk about brain freeze.

Obviously, an ice cold shower is going to get your ass up in the morning. We already talked about how they will scientifically increase your alertness, but science aside – if you have trouble getting up and pumped for the day, cold showers will change this.

15) And Then They Put You to Sleep

Ironically, while cold showers wake you up in the AM, cold therapy is one of the best ways to get an incredible nights sleep.

Tim Ferris talks about cold therapy in The Four Hour Body, by taking a 10 minute ice bath. And I quote him:

The result: it’s like getting hit with an elephant tranquilizer, even if the melatonin is omitted. Don’t expect it to be pleasant at first.