"Who doesn't like to receive gifts?  if we are honest most of us like the idea of receiving a gift and even more so if a lot of thought has gone into choosing it. I hold my hands up to being one of these people and have been very lucky in my gift receiving experiences.
However,  agreeing with Victoria Fedden,  we are all different and gifts are not that important to some people, but what better gift is there than seeing the love that is felt for you shining within your partners eyes when you enter the room."   -  Susan 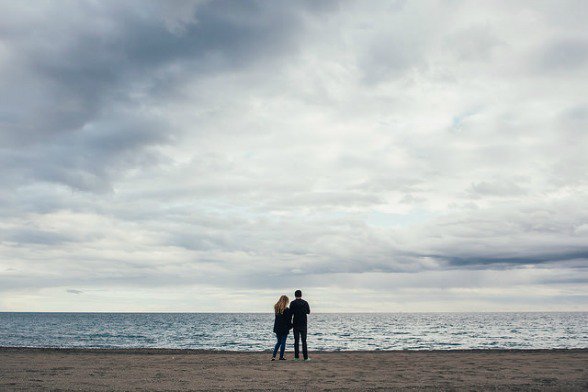 
I wondered what was so wrong with me that I couldn’t inspire a man to make a fuss over me.

I always wanted a scavenger hunt. You know, the kind where my partner would leave little notes and gifts, maybe rope some of my best friends in as accomplices to drive me all around town, looking for my next clue in places that held special significance to just us.


At the end, there’d be a big surprise, lots of flowers, candles, champagne, and a declaration of undying love for me. I know men who’ve done this for the women they loved. I also know not one but several women whose significant others whisked them away on surprise trips to Paris. Two of them got engaged there.


After I swooned, I wanted to stab them.

You see, I’d never been the object of an overblown romantic gesture, and just once I wanted to know how it felt to have a man go to all that trouble to create a romantic spectacle all for me

Maybe I watched The Bachelor too much. Perhaps romantic comedies gave me an unrealistic vision of true love, but was it really so wrong for me to crave a hotel suite flickering with tea lights and a king-sized bed scattered with rose petals? Maybe so.


Right now, I’m a forty-one year old mom who’s somehow been happily married for ten years without a single sunset helicopter ride up the California coast. I figure if over-the-top romance hasn’t happened yet, that door has probably closed and I’ve more than made peace with that.


Even though I survived just fine, minus hot air balloon excursions over Napa and picnics on private Caribbean islands, for many years I felt bitter that I’d never been with what I defined as a “romantic man.”

It was unfair. I wondered what was so wrong with me that I couldn’t inspire a man to make a fuss over me.

When would it be my turn? When would I get to be the woman whose friends were jealous because her husband constantly lavished her with date nights, bouquets, jewelry and perfume?

At one point, my resentment grew so great that I began to dread birthdays, holidays and anniversaries because I knew I was going to be let down.

The root cause of my unhappiness wasn’t my husband or any of my past boyfriends; I was creating this. I was the only one responsible for my feelings, so I needed to understand myself better to figure out the heart of the problem.


As it turned out, it was fairly simple.

I mistakenly viewed television-style romance as concrete proof of true love. I believed that all men could be moved to extreme romantic measures if they really loved their lady.

I didn’t measure up to some mysterious standard, I thought, and so I was never “good enough” for a proposal on the banks of the Seine. I came to believe that I must be unlovable.


This belief became so ingrained that I began to view the world through a lens of unworthiness where every event, every little instance, became the proof I was looking for that I lacked the spark that would make a man shower me with treats and surprises.

This couldn’t be farther from the truth.

When a friend gave me the book The Five Love Languages by Gary Chapman, it finally clicked.

Everyone shows love in different ways. This was a huge revelation, because I seriously thought there was only one way to show love.


Because I’d held such a narrow view, I’d closed myself off to all the other ways that I’d been being loved all along.

It was like I’d been blind to anything outside of my definition of romance and I’d really been missing out.

Not only that, but I finally faced the fact that I’d never been attracted to the kinds of men who enjoy romantic excess. Those men, at least in my experience, tended to be a lot more extroverted than “my type.”

I examined my dating history and found a clear pattern. I liked practical, dependable men who could fix things. They made me feel safe, so I tended to shy away from risk-takers who expressed extreme emotions.

I didn’t like show-offs and preferred partners who liked reading and bonding with me through intellectual conversations over coffee. The guys I was drawn to were too busy fixing the hot water heater to create elaborate scavenger hunts — and you know what? That was OK


I stopped looking for evidence that I was unlovable and started to focus on all the little, lovely things my husband does every single day to express his love for me — making me breakfast on the weekends, running a hot bath for me each night, working hard for our family, making future plans for us, texting me from work to see how I am, encouraging me and supporting me while I pursue my dreams, and never complaining when I want a girls’ night.

The list is endless because my husband constantly expresses his love, even if it’s highly unlikely that he will ever compose sexy riddles or shock me with a whirlwind trip to South Africa for a glam safari.

Which is fine, because jeez, that stuff is expensive. And when it comes down to it, I think I’d rather save the money for our daughter’s college fund anyway.


More importantly, I try to focus on loving him and be grateful for what he does instead of b*tching about what he doesn’t.

Giving up comparisons was another key to finding the love I already had. Holding my relationship up against other people’s was a recipe for disaster. I still need to remind myself that the cute selfies couples post on Facebook and all the bragging they might be doing about their weekend at The Four Seasons is only a tiny, heavily-filtered picture of their lives.


Someone else’s romantic getaway is in no way a comment on the state of my relationship. I get that now.


Romantic partners come in all varieties. Romance is totally subjective; when we understand that our partners can show love in a multitude of ways and we can release our expectations about what love looks like, we can focus on finding the positive in our relationships and being grateful for them. We can come to know real romantic fulfilment.

True love doesn’t look like it does on TV. It’s not found in private concerts, in hot tubs in the snow, or in professionally produced, public spectacles.