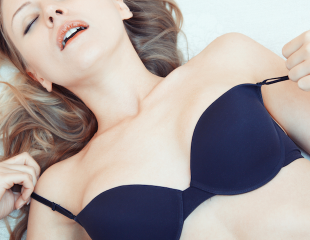 The general consensus today is that our dumb old ancestors' hysteria treatments were as useful as a balancing of the humours. And yet... what if they were actually onto something? What if women really do suffer in big and seemingly unrelated ways if their sexual desires are squelched, hidden or otherwise unmet? What if those jerks who say of tense women, “She just needs a good fuck,” are actually kinda...right?

Pamela Madsen's Back to the Body sensuous retreats for women are a lot like Ye Olde Hysteria Treatments, but with a sensitive, "viva womanhood" spin. Madsen, a sexuality and relationship coach, uses terms like “crisis of female desire,” “vaginal disconnect” or just “angry pussies,” but we're talking about the same thing: Women not being in touch with their desire, women being ashamed of their desire and/or women not expressing their desire and riding it like the wild pony it is.

The retreats, often set in glorious settings like Tuscany, offer hands-on "Taoist sensuous bodywork" sessions, workshops and exercises to overcome body shame and explore desires as well as group discussions on body image, expressing desire, and how to be open to pleasure in daily life. (Or so I'm told; retreats are super pricey, 4 to 5 grand. Further on in the story we've got tips for a DIY budget plan.)

“One of our core teachings is that your pussy is your pilot light. It's your central life force energy,” says Madsen.

Unlit pilot lights manifest in ways that look a lot like hysteria symptoms. “Depression is number one,” says Madsen. “Basically when we don't own our own desires, we become unconscious and turn to things to numb us, to distract us. When we fill ourselves compulsively with food, shopping, exercise or drama, it's basically hitting the stop button on being fully alive and fully ourselves. We allow ourselves to starve our souls until we can't take it anymore."

Madsen starts retreats by getting naked and hopping up on a table for a live demo. Sexological body workers work her over as participants look on, presumably in various stages of discomfort.

“I have arousal, I have orgasms, I laugh, I giggle, I play, I scream, I cry. Who the fuck knows what I do, because every session is different,” says Madsen. “I teach them how we move in our own bodies when the pleasure is about us and not about the giver. I'm a 52-year-old, size 14, had-a-Cesarean woman. It's very different than pornography—you get to see a real women in pleasure. A lot them have never done this before and it's scary.”

“We see a pattern of women showing up feeling angry and numb in their pussies, then we see what happens when they're allowed to explore their desire in a way where they're not shamed. Whether they are 22 or 75, size 2 or morbidly obese, there's a healing that is extraordinary. They find out that they're not broken or dirty and their bodies are incredible tools of light, inspiration and pleasure.”

Each retreat has sold out and there's a 98% return rate. Women clearly dig them, though it's unclear whether that's due to finally letting out their desires, having a good hysterical paroxysm or two, or just the general benefits of hanging out in Tuscany for five days.

Get to Know Your You-Know-What

If you don't have an extra $5,000 (as in, all of us) or the cojones to go sing your vaginal song in a room full of other women, there are plenty of other ways to get in touch with your desire.

“I like women to hold their own pussies — a lot — and to connect to that place of power in their bodies,” says Madsen. Look at it, feel it, put your hand on it and rock back and forth. (Notes Madsen: “I use the word pussy because it's friendly and I want women to pet them, but you can use the word vagina or vulva—whatever turns you on.”)

Flirt With the World

Feel your sexuality and revel in it. Even though it sounds dumb and women's magazine-ish, give your hips a bit of sway when you walk to remind yourself that you are indeed a sexual creature. Have a crush on someone. “Crushes do not have to be fulfilled. And sometimes, they are best left as muses. But a muse or crush can certainly raise our arousal levels,” recommends Madsen.

Consider getting some sexological bodywork. Sexological body workers are kind of like masseuse/therapist hybrids who can also provide happy endings. Madsen details her fascinating experience paying for sensual touch in her book, Shameless: How I Ditched the Diet, Got Naked, Found True Pleasure...and Somehow Got Home in Time to Cook Dinner. Her body worker, a gay man, knows Madsen's wants and needs even before she does, kind of like a human version of Pandora.

Whether you call it hysteria or sad pussies, it feels like Madsen is onto something big here, something primal and true. “When you feed women what they need and want, when you help women find their sexual agency, when you help women find their desire, then you create a world of happy pussies that support other women in their happiness. I think that will heal the earth,” she says. “What a big fucking statement this is!”