The Sniff Test: When Dogs Become the Match Makers


Even with numerous businesses and websites dedicated to matchmaking, you can still find love just taking your dog for a walk

The road to dating is paved with such websites as eHarmony.com, Match.com, even GlutenfreeSingles.com and MulletPassions.com (we’re not talking fish here) … and then there’s Fido. No cyberspace required. Just ask those whose canine companions led them to their significant others.

It was just another day in New Orleans’ City Bark dog park for Rich Bouchner, a wealth manager, and his 95-pound Great Dane/lab mix. Little did he know that his dog Easy would lead him to love.

Leaving the park, Bouchner began talking to a woman as they walked their dogs out. The conversation ended with the woman saying, “I have a friend I think you should meet.”

“I talked to my friend, and she wants to meet you, too,” said the woman. So what inspired her to turn a dog walk into a match-matching opportunity? Both Bouchner and the woman’s friend, Elizabeth Fahey, the owner of an organic juice delivery service, loved dogs. Drawn to each other via the canine connection, the human connection took on a romantic life of its own.“Today we’re a unit,” said Bouchner, a year after meeting Fahey. “The three of us go everywhere together.”

So what if Easy hadn’t connected with Fahey?

“It would have been a game-changer,” said Bouchner. Fahey had a must-love-dogs requirement as well. “As a vegan, I feel strongly that the person with whom I’m sharing my life is not only a dog lover, but a lover of all animals,” she said.
Scott Wanke and his dog, Coal, were buddies. They traveled across the country, taking in as many states as they could in as many ways as they could.
“We went hiking, backpacking, cross-country skiing, camping and snowshoeing,” said Wanke, a physical therapist. Coal was about a year old when Wanke adopted him. The black Australian shepherd/lab mix had been neglected and confined, and had no social skills when he came to live with his new owner.“But Coal turned out to be the ultimate dog,” said Wanke. 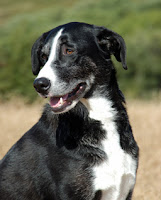 The canine sidekick always hopped into his owner’s truck when there was an opportunity to go anywhere. At least that was the case until Scott met a woman named Lara Heyliger, also a physical therapist, 10 years later.
“From the moment Coal met Lara, he loved her. It got to the point that when I would pull up in front of Lara’s apartment and open the door for Coal, he would run straight up to her place on the second floor. And if we all left Lara’s apartment together and walked out to our separate cars, Coal would hop into Lara’s car. And Lara was a cat person!” said Wanke, who was elated, rather than jealous, that his dog was as fond of Lara as he was. That bond actually sealed the deal for romance and ended in marriage two years ago for Wanke and Heyliger.
“If Coal hadn’t fallen for Lara as I did, we wouldn’t be here in New Orleans,” said Wonke.
Coal lived only a couple more years. He was 11 when Heyliger first came into the picture. Just recently, Scott and Lara adopted another rescue dog.
It makes sense that a growing community of dog lovers looking for love is now on the ever-growing list of internet dating sites. Yes, there is a youmustlovedogsdating.com site.
Locally, those who have followed Rover’s lead in social settings such as dog parks often say that they trust their dogs’ judgment. Bouchner has never doubted that his dog Coal “has a good read on people.”
“If my dog Annie is positive toward a suitor, I find I am more open,” said Lore McPeek, a licensed massage therapist. “I read her radar. If she snubs someone, I see a yellow flag. Caution.”
There are no definitive studies to prove that dogs have the ability to judge character in humans, but famed dog trainer Cesar Millan, of the National Geographic channel “Dog Whisperer” series, works on the premise that dogs read a human’s energy. A study conducted at his center indicated that dogs have instincts about other dogs that can kick in from a distance as far away as 50 yards. 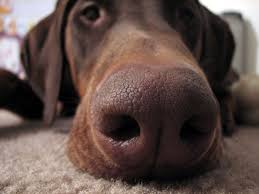 “I don’t think dogs are matchmakers in a direct sense. In other words, I don’t believe they hone in on a potential mate for their favorite human companion. Indirectly, however, they create opportunities for more human interaction. Dogs are fabulous conversation starters, and without a dog, there would be missed opportunities for such interactions on walks, trips to the dog park, involvement in dog classes, trips to the pet store, and so on,” says Dr. Nancy Kay, a board certified specialist in the American College of Veterinary Internal Medicine, blogger (speakingforspot.com/blog), and author of the book “Speaking for Spot.”


“I do believe that dogs (and animals in general) have strong and accurate instincts about a person’s character, but at a first meeting I’m not sure this comes into play. As a relationship progresses, how the dog feels about their human’s romantic interest may be a factor (in how the relationship progresses),” said Kay. 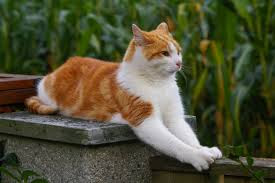 Kati Stewart (now Kati Hill) was a graduate student in 2007 when she took her cat, Lola, in for a second opinion after getting the disheartening news that her beloved pet had feline leukemia. The new vet, however, determined there had been a misdiagnosis and that her cat was perfectly healthy. After the appointment, she shared the good news about Lola to a girlfriend and added, “By the way, this vet is so cute!”
She adopted another cat and returned to the vet, Dr. Brian Hill at Maple Small Animal Clinic. During the feline exam, she couldn’t help but notice how Dr. Hill and her cats connected.
“I knew he had a kind heart,” she said. The devoted cat person also noticed that her new vet wasn’t wearing a wedding ring.
“I used to be very shy, but at the urging of my stepmother, I wrote him a thank-you note that ended with ‘Let me know if you would ever like to have coffee or lunch,”’ she said.
A response to her note came the very next day. Fast forward to marriage in 2009 and now a family of two children, two dogs and two cats.
“The cats love him more than they love me,” said Kati Hill.
In the interest of equal time, there are dating sites (such as purrsonals.com) for cat lovers.