Bachelor Pad or Fortress of Solitude? 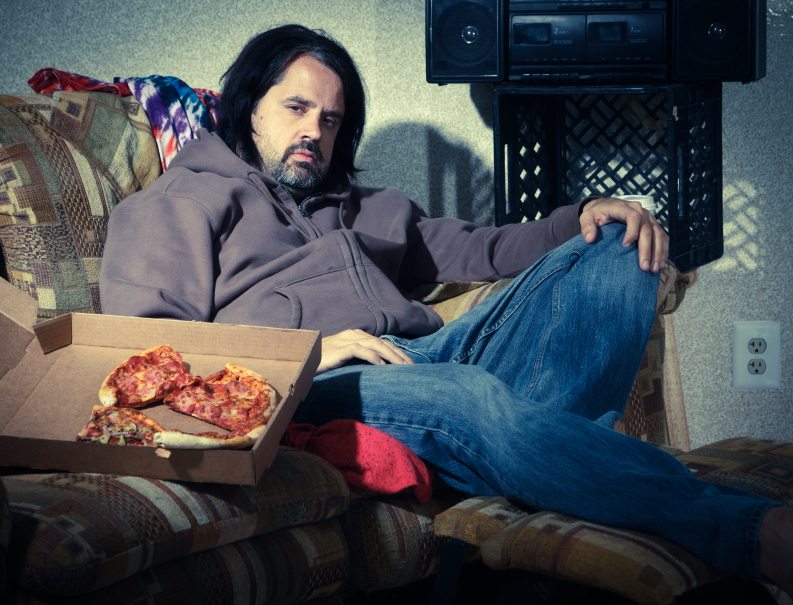 Bachelor Pad or Fortress of Solitude?

It’s time to be blunt, nerdlings.
Your bachelor pad is going to fuck up any chances you have of getting laid this weekend. Harsh but true. There is nothing quite as well designed to make sex disappear as the man-cave that doubles as a nerd home. When your girl gets through the door and sees the Naruto wall-scrolls and the massive Battle of Hoth diorama you have lovingly built out of Lego sets and balls of cotton… well, if she’s like most women she won’t let out the scream of ultimate despair that she’s feeling inside, but you’re about to find out that she’s suddenly remembered an urgent appointment she has early in the morning and she’s really got to go…like, thirty minutes ago.
Remember that scene in The 40 Year Old Virgin? Yeah. You don’t want to repeat that scene in real life.
Your pad should not be a nerd Fortress of Solitude, emphasis on “solitude”.
‘Sup, ladies?
Don’t despair. Here’s how you make sure that your place doesn’t scare away your date as soon as you open the front door.

Please notice the operative words here: Like a man. Not like a man-child. Not a college student. Even if you are a college student. Hell, especially if you are a college student. Learn the lessons early and they will stand you in good stead.
What does this mean? Well to start with, that home theater system that you’re so proud of doesn't count as decorating. It’ll impress the hell out of your buddies and makes for awesome Call of Duty multiplayer, but no woman is going to be seduced by your gear to the point of ignoring the rest of your pad.
It’s time to start taking stock of everything on your walls. Unframed posters, anime wall scrolls, photos held up by blu-tack, neon beer signs, dart-boards… these are all signs that the man living here never really left the dorm. This is not the image you want to be sending. And let’s be honest, it’s probably time for most of these to go. There are far more attractive ways to let your nerd flag fly. A James Bond movie poster thumbtacked to the wall… not terribly attractive. That same poster in Italian, in a simple but elegant frame? Now that’s art! Framed and matted black-and-white photos are also excellent additions to a bare wall.
Find a stylish display case for your CD and DVD collections, but for fuck’s sake weed out the porn! I don’t care how kinky or open-minded a woman may claim to be, porn out in the open is going to be an instant turn-off.  This is the 21st goddamn century; you shouldn't be buying porn DVDs any more, that’s what the Internet and a password-protected file marked “Tax Statements 2001-2011″ is for.
Grab some throw-pillows for the couch. Yes. Throw-pillows. Find a couple in colors and patterns that compliment your raggedy-ass couch, arrange them to cover up the worst of the stains and marvel at how it transforms into something a woman may actually want to spend some time on.
Get some books. Actual books, not just graphic novels or magazines. You want to show that you actually have some intellectual curiosity. I’m not saying that you should fill your shelves with impressive books you haven’t actually read, but theydo look awfully nice up there, don’t they?
Consider some candles. Don’t go hog-wild at Yankee Candle, mind you; you want something masculine and subtly scented. There are a number of attractive block candles that don’t give off a “girly” vibe. Besides, turn down the lights, light a couple candles… instant atmosphere. 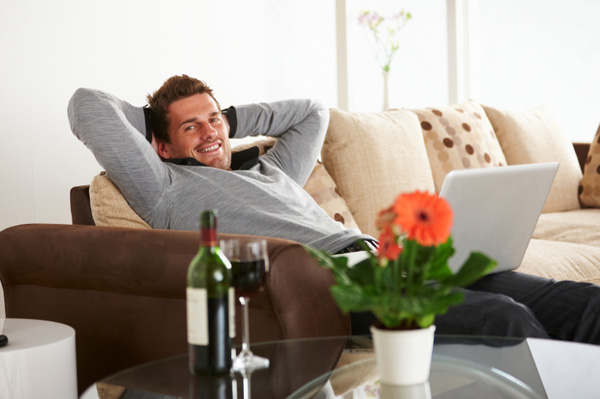 Did I mention clean? It really can’t be emphasized enough: most young men’s lairs could double as biology experiments devoted to evolving cockroach colonies into the next stage of existence. You should not only know that you have a floor because all your crap hasn’t fallen through to the apartment below you. There is nothing less appealing to a woman than the pervasive scent of mold and rotting pizza.
Flipping the cushions over and shoving everything under the bed doesn’t work. You’re going to have to get elbows deep in it.
It can seem like a daunting task at first – especially if it’s been a while since your last deep cleaning – but it can be simplified nicely by attacking it in stages. Take a trip to Target folks, it’s time to lay in for supplies. You want a fresh bag in the vacuum cleaner, Swiffers, garbage bags, vinegar, spray bottles, baking soda, sponge cloths, chamois, newspaper, vanilla extract and vodka.
Yes. Vodka. Stick with me here.
Start with bulk trash removal; if it doesn’t actually have a place in the house, it’s going into garbage bags and tossed out the front. From there, you pick up and organize. Following that: vacuuming and dusting. Vacuum every cloth covered surface in your place. This includes the couch, chairs and the bed. Flip over the cushions, vacuum the undersides and switch them around on the couch. Use Swiffers on every hard surface that isn’t electronic equipment; there’re specific dusting cloths you’ll want to use for those.  Next: sterilization. White distilled vinegar is more or less the only cleaning solution you need; pour it into a spray bottle and use it like Lysol; use the newspapers to wipe down every glass surface you use the vinegar on Spend extra time in your kitchen and your bathroom, especially the toilet, bathtub and shower. These are going to be the areas where women will judge you the most harshly. As nice as the rest of your place may be, a disgusting bathroom can mean the difference between making out on the couch or two hours of watching a movie you hate followed by a firm handshake goodnight. 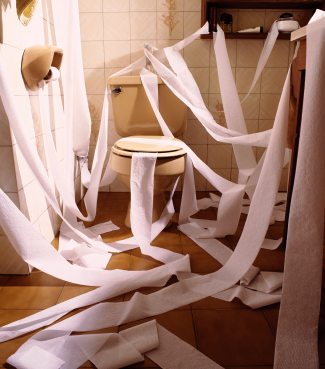 “No, no, I’ll just let myself out, thanks…”
Finally, deodorize; fill a spray bottle with cheap vodka. Mist every funky-smelling piece of upholstery and clothing in the house. Open the box of baking soda and shove it in the fridge. Pour a teaspoon of vanilla extract into a quart of water, then boil on the stovetop until it’s evaporated.
Now stare in wonder at an apartment that doesn't make you afraid to wander around barefoot.

Don’t want your pad to look cluttered? Don’t want to have that sitcom moment where she opens the closet to hang up her coat and is buried under an avalanche of crap? Want a place to hide your goddamn porn? You need to get organized. Take stock of your current storage space, especially in your closet, then take a quick trip to the store. Whether it’s the Container Store, Ikea or Target, you want to get some low-cost, high-impact closet organizers. By taking a day or two of rearranging and re-organizing your closet you will find you will have doubled your storage space.  And it’s a good thing that you did because the next step is…

Tone Down The Nerd Collection

Look, nobody’s saying you have to be ashamed of being a geek. But the fact remains that the massive array of action figures, movie replicas, comics and collectable figurines lining your shelves aren’t exactly chick bait, especially if any of them entail scantily clad balloon-breasted women. A collection is well and good, but once it goes beyond a certain point, it sends the message that you don’t have room for anything else in your life… especially her. Being a geek is part of who you are, not the only thing you are, and your pad should reflect that.
Pare it down to a few choice pieces and box up the rest. If you feel the need, you can rotate pieces in and out of display like a gallery.
Your bachelor pad is something you should be proud of.  It should reflect who you are and be an attractive, inviting place for women to visit. Make the upgrade from man-cave, and you won’t find yourself being cock-blocked by your own living room.