"When it comes to love and relationships people expect each other to be honest, however we all value our sense of freedom and privacy.  So whilst romantic couples want to please each other, at other times there may be competing goals which can make telling the truth more difficult.
Close relationships involve a lot of truth telling as well as some dishonesty. Husbands, wives, boyfriends and girlfriends, betray those they love. Deception comes in handy when people want to limit their partners choices, avoid conflict or punishment.

To all the liars out there, remember, to be a good liar you have to have a really good memory, is it worth all the stress?!!"       - Susan

Your spouse wants you to pick up the dry cleaning, but you're running late from work. If you stop to get it, you won't be able to work out. So you head to the gym, go home and say, "Sorry, I forgot."

Couples tell each other little white lies all the time. They've learned that sometimes telling the truth starts a fight. But the fight really isn’t about whether the dry cleaning was picked up, according to Dr. Peter Pearson, co-author of Tell Me No Lies. “It’s about all the other times in the spouse’s life where someone else’s needs came before theirs,” he says.
While this type of lying is relatively benign, lies tend to undermine the glue that holds relationships together -- trust. Trust is the expectation that another person won't hurt you when you're vulnerable.

Yet people deceive each other anyway. Why? “People lie for three reasons,” says Stan Walters, author of The Truth About Lying: How To Spot A Lie and Protect Yourself From Deception. “They lie to hide something from you, to harm you in some way or to hype themselves.”

Is someone is lying to you? There is no way to be 100 percent sure. Even the experts can’t always tell. “I’ve had couples in my office and I know one person is lying to their partner and I do my best to scrutinize for signals and I can’t pick them up. Some people are that good,” Pearson says.

Behaviours we often associate with lying -- arm crossing, sweating and sweaty palms, increased heart rate, skyrocketing blood pressure, ums and ahs, fidgeting, crossing legs and laughing inappropriately -- aren’t accurate either. They may be more about feeling intimidated than telling the truth. The biggest myth is that you can catch a liar by watching their eyes. “Looking away or looking down are the least reliable indicators of lying,” Walters says.

But there are some clues to spotting a liar. One sign by itself doesn't necessarily mean someone is lying. However, Walters says, when you see two or more signs, you can be pretty sure someone lying.

How to spot a liar:

When a person lies, specific tissues in the nose usually engorge, says Dr. Alan Hirsch of The Smell & Taste Treatment and Research Foundation in Chicago. This nasal engorgement, which Hirsch calls the “Pinocchio Sign,” causes cells to release histamine, which in turn causes the nose to itch.


Look for negation cues such as covering or blocking the mouth or covering or rubbing the eyes, nose or ears, and aversion clues such as turning the head or body away when making a crucial statement.


Religious phrases such as “I swear on my mother’s grave,” “God, no” or “As God is my witness.”

Denial phrases such as “trust me,” “honestly,” “and “to be perfectly honest” are evasive. Evasion is about trying to change a perception about actions. Denial phrases repeated over and over are typical clues to lying. 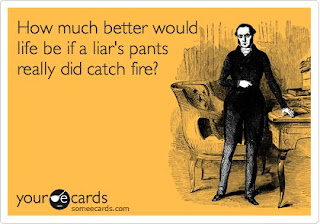 How to avoid getting taken:

If you’re living with someone who lies, there’s a formula that goes with the lying process: "Desire, opportunity, ability,” says Walters. "Spouses can’t do much about mate’s desire or ability to lie to them. The only thing a spouse can do is control the opportunity for the lie to succeed.”

Refusing to buy into a lie removes you from the target list because people continue to lie when they know they can get away with it. On the other hand, unless you want to destroy the relationship, don’t scream, “You’re a liar!” Instead, give the other person an opportunity to be forthcoming. Say, “I think there’s something going on that you’re worried about how I’m going to react when I find out and I think we need to bring it out into the open so we can handle it together.”

“If you tell your spouse, ‘I want the best relationship. So, I’ll always be honest with you. Can you commit to being honest with me, even if it’s hard?’ It’s amazing how people will stick to that commitment,” Walters says.

On the other hand, if you find that your spouse is continually abusing you by lying, it’s time to reconsider the relationship. No one has to be a victim of deception.


How To Spot a Liar Online