I'm surprised no one's refreshed a certain classic '80s hit with a modern update. "Online Dating Is a Battlefield" would do well on iTunes, don't you think? Here's one secret that can make online dating easier: Put way less effort into your messages, says OkCupid cofounder Christian Rudder in Dataclysm: Who We Are When We Think No One’s Looking.

I picture successful online dating and think of well-crafted messages a few paragraphs long that prove you've read a guy's profile. Surprisingly, the average message users fire off only comes in at 100 characters. The ones that garner the most responses are even more bite-size, racking up only 40 to 60. I'd be terrible at this since I struggle to keep my tweeting within limits! Even though short messages say less, it can actually be harder to make them seem effortless. Rudder has some advice on that front: Don't overthink it! 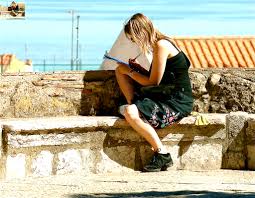 People aren't agonizing over the best short message to send. It helps to think it through a bit, but spending more than two minutes trying to write a message between 150 and 300 characters didn't bump up chances of a response. Rudder explains an easy way to cut down on your composing time is to send "memorized digital pickup lines" by copying and pasting a message that seems tailored to the user but is actually a template. I raised an eyebrow when I read this, thinking there's no way that can be actually work. Isn't it always obvious when someone's blasting tons of users' inboxes with the same exact thing? Not quite. Copying and pasting first messages is only about 25 percent less successful reply-wise than composing them for each person! That's no surprise when you check out this example:
"I’m a smoker too. I picked it up when backpacking in May. It used to be a drinking thing, but now I wake up and fuck, I want a cigarette. I sometimes wish that I worked in a Mad Men office. Have you seen the Le Corbusier exhibit at MoMA? It sounds pretty interesting. I just saw a Frank Gehry (sp?) display last week in Montreal, and how he used computer modelling to design a crazy house in Ohio."
This gentleman sent the above to 42 women who were into cigarettes and art. If I received that, it would never cross my mind that he was sending the same exact thing to lots of women. It's a far cry from the suspicious "hey girl u cute" variety that's obviously one of many. This guy got five responses, which doesn't seem impressive until you think about the fact that those replies were from the exact kind of person he was looking for. He got five great matches with relatively little effort and a few strokes of his keyboard. Makes this tactic kind of tempting!
What do you think? Will this research change how you date online?
View the original article here