“The feminist agenda is not about equal rights for women. It is about a socialist, anti-family political movement that encourages women to leave their husbands, kill their children, practice witchcraft, destroy capitalism, and become lesbians.”

Pat Robertson famously said this in the 90s, and the sentiment still rings as true in the ears of many today.  It’s an understatement to say that feminism has a bad rap.
Feminism doesn’t hate men.

So why do so many people think feminism = man-hating? Let’s look at a few explanations for this fallacy. 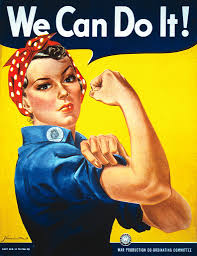 You don’t have to look very hard to find examples of “feminists” who hate men.

But there’s a difference between “feminists” and “misandrists.”

Ever heard the term misandrist? It’s like misogynist but for hating men instead of women.
Yes, misandrist is a word. But feminist doesn’t mean “person who hates men.”  Feminist means “person who believes people should have equitable places in society regardless of their gender.”
Some feminists may be misandrists.  I linked to a couple above.  But it’s by no means a criterion to join the club.

A portion does not equal the whole, even if that portion is really loud.

Though they’re not even that loud, but can seem so because anti-feminists like to cherry pick quotes and ignore the much greater number of feminist writings, people, and organizations that say otherwise.

Some individual feminists hate men.  A lot of feminists might hate men. You might even argue based on what you find on the internet that most feminists hate men.  It’s irrelevant.
What matters is that feminism, distilled down to its absolute core, is about gender equity.  The goal of feminism is to create a society in which individuals’ genders don’t restrict them from an equitable shot at success and happiness.
Most feminists actively disagree with the belief that women are better than men and think that feminists who are anti-men are going against the fundamental principles of feminism, which says we’re all deserving and worthy human beings – women, men, trans* – and should be treated as such.

So man-hating isn’t a part of that goal.  It’s an unfortunate reactionary sentiment bought into by some people (misandrists) who also identify with the feminist movement.

A lot of people get drunk in college, but we know that college is more than a big drinking club, right?  Isn’t it?  Maybe I attended the wrong college

The whole “feminists hate men” thing has been tossed around for quite a long time now.  It’s not new.  The first “feminist” women who began advocating for equal status of women in the US did so in the late 1700’s, but it didn’t really pick up steam until the late 1800’s.
What crazy radical things were these man-haters asking for?  Primarily, the rights to own property, to attend college, and to vote.

In response to these requests, they were were labeled as anti-family, anti-God, anti-men radical hedonists.  That labeling has continued to today, because — surprise! — a group with a lot of power (men) tends to do whatever it can to maintain that power (dismiss equal rights as radical).
It’s happened with every oppressed ethnic group (from the Irish to the Africans) that’s immigrated the country.  It happened with oppressed religious groups (from the Catholics to the Muslims).  And it continues today with the oppressed gender group.

Why do people believe it if it’s not true?

Because people are irrational.  One of the ways I know this is true because there’s an entire book written about it.  An example of how we act irrationally is called diagnosis bias.
A particularly fascinating study showed that the smallest change in the way you describe someone can completely alter the way you perceive their behavior.  How about an example?
A university class (unknowing lab rats) had a substitute professor.  To introduce the professor, the class members were given short bios.  What they didn’t know was that half the bios had been very slightly altered (e.g., exchanging warm, positive adjectives for cold, callous ones).
After the lecture, the students were asked to review the professor.  The entire class saw the same man say the same things, yet the reviews were split 50/50 positive and negative.  Half the class said he was personable, considerate, and engaged, while the other half said he was ruthless, would do anything for success, and didn’t care about students or people.
The smallest change in the way someone is described can make a dramatic change in the way you interpret their behavior and demeanor.
Now, hypothetically speaking, imagine how twisted the perceptions would have been if the students were told the professor was a student-hating, self-serving, radical hedonist.
Oh wait.

Let me bust a few myths.
A lot of people think about the things above, think about the men they know (or, if they are men, they think about themselves), and think “That’s ridiculous, ____ isn’t an evil rapist who is responsible for hundreds of years of sexism.”
A lot of people are right.
The thing feminism thinks is bad is the hundreds of years of sexism part, as well as the existence of sexism today.  Sexism is the problem — sexism that a lot of men engage in and a lot of women internalize.
Men engage in sexism because they’ve been taught to behave/think that way.  Women internalize it for the same reason.
Feminism asks both men and women to critically think about those normalized behavior and its impact, and holds people accountable to sexist thinking and behavior even if they didn’t initially realize it was sexist.
So yes, it’s natural to get defensive when someone brings up feminist issues because it’s likely you never thought you were doing anything wrong.  Does that make sexist behavior acceptable?  No.
That’s why we need to do a better job as a society to teach people how to treat each other with equity.  That’s what feminism is trying to do here.

Working towards gender equity means equity for all genders, right?  Then what about men?  And what about trans* folks?  This is a question that often gets raised by men (about men, not as much for trans* folk).
Feminism in general has mixed feelings about addressing men’s (and trans*) issues.

I’ll be the first person to admit that there are a lot of gender-based men’s issues to address.  Like why young men today are less likely to graduate from college, attain a high GPA, be active in extracurricular organizations or seek leadership roles; or why men in general have always been more likely to be caught up in the criminal justice system or be homeless.  These are real issues, surely, and things our society should work to correct.
But do many feminists ignore these issues because they hate men?  No.
The mixed feelings about addressing men’s issues tend to stem from the fact that “men’s issues” tends to be the default in our society.  We’re a male dominant society.
Many feminists are concerned that addressing men’s issues (or gender issues as a broad goal) will move the conversation completely away from women’s issues, resulting in no progress for the women’s part of the gender progress.

So instead they focus on women’s issues and allow others to focus on other’s issues.  Many feminists would like to see pro-feminist men tackle men’s issues in a way that doesn’t blame women and feminism for all their problems (like MRA’s).
However, it’s worth noting that we here at Everyday Feminism are both men- and trans*-inclusive.  We take an intersectional approach to feminism and look at how different groups of genders, sexual orientations, races, classes, and more are dominated in our society. Our inclusive approach is a big part of our popularity – i.e. a lot of feminists are also inclusive.

It’s pretty messed up that being born a certain way means you’re going to be less likely to earn as much money, achieve the same tier of success, be treated with respect and fairness, be elected into political office… but those restrictions are objectively measurable.
Those issues mentioned above affect just about every identity group in the US other than people who are White and male (and straight, non-disabled, etc.) — like me!
Instead of dealing with inequality and giving up a bit of unearned power, it’s far more fruitful to change the conversation and put the oppressed group on the defensive.
Blacks are more likely to be imprisoned because being a criminal is part of being black.  Have fun arguing about that while we enjoy our unfairly granted innocent verdicts.
Gays can’t be given rights to form families because being a child molester is part of being gay.  Go ahead and re-read all of those nonsensical studies and commission some more while we enjoy our access to 1,138 benefits granted solely to married couples.


Women don’t earn as much as men because earning a lower wage for the same work is part of being a woman.  Oh, and babies.  Don’t forget, you make the babies.  What a miracle!  That should be payment enough.

Social change is slow because the people in power are the ones writing the narrative, and they often choose a distracting narrative.

Did you know that up until the early 20th century there was an actual medical condition called “female hysteria” (yes, “hyster,” as in hysterectomy, or pertaining to the uterus)?
Some of the symptoms of female hysteria: loss of appetite, nervousness, irritability, fluid retention, emotional excitability, outbursts of negativity, excessive sexual desire and “a tendency to cause trouble.”
In other words, if a woman wasn’t eating, was eating too much, was angry, happy, wanted to have sex, or wanted equal rights for women (you trouble causers, you!), she was mentally ill and her behavior could be dismissed as such.
Guess who came up with that idea? You guessed it!  White dudes.

Am I Trying To Bring the White Man Down?

No.  I am a White man.  That wouldn’t serve me well at all.
What I’m trying to do, and what feminism is trying to do, is bring the woman up.
While an understandable response to this idea for men is a defensive one, considering so many of the bad things in history have been caused by men (by so many, I mean, like, all of them).  That’s also a positive response, because it means you’re accessing empathy.
You don’t want to be seen as the “bad guy” (what a misandristic term!).  You don’t hate women.  You’ve never oppressed women.  Of course you haven’t.  Oppression doesn’t happen on the individual level.
But it happens.  And as a man, particularly one who is White (like me!), you are granted a lot of privileges that stem from hundreds of years of oppression.  You get that privilege whether you choose to have them or not.
The only choice you get is what you do with your privilege.
Do you use it to make for a more equitable society for
all human beings, of all genders?
Or do you keep whining about how feminists hate men and distracting yourself and others from serious issues of inequality?