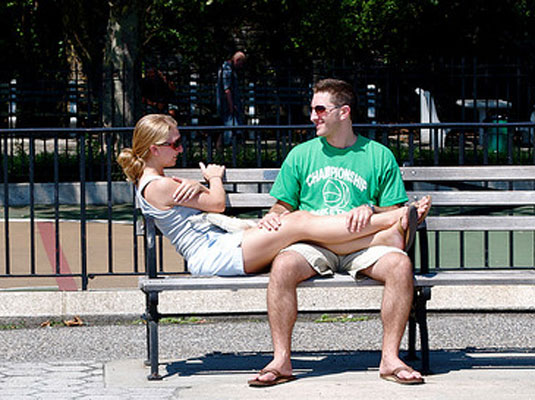 One of the most widespread forms of miscommunication between men and women stems from the fact that too many people, especially men, equate sex with romance. They believe that if their sex life is adequate, then there's no need for anything beyond this one arena. Tied to this is the notion that romantic activity outside the bedroom is automatically a lead-in to sexual activity.
And by the way, this is a double-edged sword. Many people think of kissing and hugging as preludes to sex.  As a result, when they aren't in the mood, they don't want to snuggle because they assume that it will lead to sex.
This can be true of both partners in a relationship where a pattern has been established that kissing and hugging lead to sex. So the first batch of people may avoid physical contact if it's not attached to sex, and the second group may avoid physical contact because they fear that it will lead to sex at the wrong time.
Either way, the partner who is looking for some physical contact that is not sex-related gets left hugging her knees.
Communication is vital in this arena. The partner who wants romantic touching has to explain that she would like some more physical contact that is not linked to sex. She has to explain to her partner that just the way a car needs oil to keep the engine running smoothly, she needs some hugs, kisses, and hand-holding in order to keep her spirits going.
The onus isn't all on men, however. Some women crave romance but purposefully shut down their libidos once they get their fix because they're a bit busy or preoccupied. They are satisfied by the hugs and kisses, but they don't consider what will satisfy their partners.
Although romantic interludes don't have to lead to sex, if they're heading in that direction, veering off the path every time is not a fair way to treat a man. If women allow themselves to become more aroused, they usually do enjoy having sex and have orgasms.
But sometimes they stuff themselves on the appetiser and then don't feel they have room for the main meal. Their partners, who require more sustenance, are left feeling frustrated. If this scenario occurs too often, then clearly the relationship can suffer.

Decoding confusing signals
Another cause of confusion occurs when couples try to communicate with each other about which signs of physical affection will lead to sex and which won't. Two key facts need to be remembered: Men get aroused easily, and women can change their minds.
Even though a man may get aroused by some hugging and kissing and even have an erection, this doesn't mean that he'll start writhing on the ground or baying at the moon if he doesn't have sex. Men, particularly young men, get erections all day long and all night long as well (usually every 90 minutes during REM sleep).
After a few moments, these erections grab a cab and head downtown of their own accord, providing that the man isn't getting further stimulation. If he is being constantly stimulated, then his arousal will reach a point where it is difficult for him to just say no.
But the stimulation from a one-minute hug, providing that he and his partner are not in the nude and she keeps her hands above the belt, doesn't mean that the next step has to be a sexual encounter.
And a woman who was just looking for a hug may suddenly find that she is interested in sex, even though that was not on her mind beforehand. Women always claim the right to change their minds, and sometimes they're just too busy to realise that they were somewhat aroused.
When they take a breather in the arms of their man, they relax a bit and suddenly realise that there was more to their desire for a hug than just romance.
You may think that two people who are part of a long-standing couple should know enough about each other to be able to judge when they are going to have sex and when they're not, yet they often act like a couple on their first date — he's on first base wondering if he'll get to second.
What's the answer? Improved communication. You have to be able to share your sensitivities with your partner without hurting his or her feelings.
If a woman notices that her partner has an erection, she has to be able to tell him that she's not in the mood without him getting upset. And if she decides that she is in the mood and they do have sex, the next time they hug, he can't assume that it's going to happen again.
It's very easy for there to be crossed wires in this back-and-forth exchange, particularly if both people change their minds faster than an operator can plug in the connection.
Avoid setting fixed patterns. Each party needs to show flexibility. That means if sometimes she asks for a hug without thinking about sex, she will let herself be brought over to the bed and try to enjoy it. At other times, even if a particular kiss drags on a bit longer than usual, she can go off to finish the paper without feeling guilty and without him donning his hangdog face.
It also means that she should initiate sex from time to time, and he should initiate hugs. Good communication means a back-and-forth interaction. It means surprise. It means that your minds are engaged and that you're not acting out the same script over and over.

Improving conversational content
This seems like the appropriate place to delve into the content of your communications. If all you do is talk about such superficial matters as the weather, the children's science fair project, and what to defrost for dinner, then your relationship is going to be rather superficial as well.
That's not to say that you shouldn't talk about mundane subjects. A life is a bit like a business, and you need to deal with managerial matters. But conversations you have with your coworkers aren't likely to lead to sex.
You can spend hours at the water cooler bantering about sports, politics, and office gossip without ever probing any depths. If your conversations with your significant other are equally superficial, then what does that say about the state of your relationship?
Admittedly, some people who have partners still pour their hearts out to their coworkers.
Sometimes they've found someone who is simpatico and doesn't mind being a good listener. Or they've found a busybody who likes peering into other people's private lives. And sometimes the other person is bored to tears. But if the talker is baring his or her soul at the office and clams up at home, that's not a good omen.
Meaningful communications don't have to only be about personal crises. Endless talk of problems will turn off a partner, no matter how sympathetic he or she is. Rather, what is "meaningful" is what stimulates the intellect. For example, say you watch the news and the Supreme Court has ruled for or against some case.
Talking about the pros and cons of that decision should be equally interesting to both parties. You shouldn't be so polarised that such a conversation creates an automatic fight. If that's the case, then put those topics off limits. But there should be areas of discussion that allow you to learn more about your partner as you exchange ideas.