"Just like some females are attracted to the bad boy, some men like to chase the bitch. Maybe its because they think that the bitchiness or bossiness will carry on into the bedroom, maybe they like a strong woman who will tell them what to do. Alternatively it could be that they are attracted to their self-confidence and do not feel intimidated by them, they like the excitement that comes with somebody who is not predictable. Or perhaps its because they want what they can't have."       - Susan


Are you attracted to high-maintenance women?


Ever been trapped in this scenario? Maybe you were on a plane. Maybe you were in a restaurant—wherever you were, you couldn’t help but overhear the conversation of a couple seated in close proximity. The woman spewed a seemingly unending list of demands, complaints, invectives and put-downs, while her paramour looked on helplessly. Perhaps out of sympathy (but more likely, self-preservation), your hand crept to your lap, shielding your own tender jewels from the ball-consuming fury spewing forth like a radioactive cloud. All you could do was silently scream, “Run, you fool! Get the hell out of there before that evil succubus (read: bitch) eats you alive!”

These days, “bitch” is a term that’s bandied about with fair frequency, even outside the AKC. It's even become a point of pride for select women hoping to becoming a better seductress. For many in modern culture, it’s cool to be cruel.

On the other hand, if it walks like a duck, quacks like a duck, and acts like a bitch…well, you know the rest. We're sure that at least one of your buddies (or maybe even you) is dating one. If you’ve ever wondered why your pal’s voluntarily surrendered his man card and settled in for the long slow ride to the Land of the Cojones Perdidos, read on.

THE “HARD TO GET” FACTOR


Just as Groucho Marx famously said, “I don’t care to belong to any club that will have me as a member,” men famously do not want what they can have with ease, especially women. (Can you imagine if men selected fruit using the same criteria? Durian sales would go through the roof.) Because bitches are often aloof emotionally, although not necessarily physically, they become the giant stuffed unicorn at the sideshow ring-toss game. Even when the action’s fixed, winning the prize becomes an obsession, and guys keep on playing, long past the point of reasonable expenditure.

COMMITMENT CHALLENGED
Certain males are drawn to bitches because romantic relationships with built-in self-destruct cycles secretly appeal to them. According to Dr. Patti Britton, Ph.D., MPH, ACSE, ABS, ACS, FAACS, and co-founder of SEX COACH U, “Some commitment phobic men really do not like to commit. We see it a lot with clients who are in courtship mode. Then some show up married after time has passed, and they’ve tried to fake it—faked being real, faked finding love, faked trying keeping lust alive—and discovering after all that, something is missing.”


Britton ascribes some of the reasons for this self-defeating behaviour to a lack of social skills, fear of authentic intimacy and lack of positive role models for intimacy in a man’s family of origin. But whatever the catalyst, hitching your wagon to a bitch guarantees you’ll be hitting the end of the trail sooner rather than later 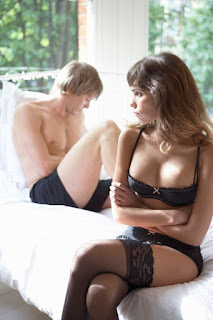 She adds, the brave new world of “cyber-everything” has only exacerbated the problem, citing that what may “feel” or “appear” to be real relationships—even friendships, such as your Facebook friends—are built on pseudo-intimacy. “Many men spend far too many hours alone watching media, being isolated, lacking social and sexual development skills,” she notes, “and as a result, form false expectations for relationships. When they attempt to find a ‘real woman,’ they look in the wrong places for the ‘bad girl,’ who turns out to be a disaster—nasty and toxic.” (Or Kardashian…

It’s “Mommy” issues. Men (and women) who grow up in dysfunctional families are often doomed to recreate negative behaviours in an attempt to heal the deep-seated hurt that arises from neglect, indifference, or worst-case scenario, abuse. All children deserve to be loved, however, some sperm and egg donors are not capable of imparting that emotion—and yet, they reproduce. The result is often offspring who grow up looking for approval that they are never going to find. Our advice? Seek therapy, and do not procreate with a bitch, lest you consign your children to the same fate.

Like their AKC counterparts, some bitches just want to get laid, and when they’re in heat, emotional collateral damage is the last thing on their minds. If she can suck the whitewall off a tire, has a nymphomanical appetite, and the sexual stamina of a warren of Energizer Bunnies, your pal (or you) may be so come-addled, he doesn’t give a damn that his woman’s a bitch. The bad news: his balls may soon go the way of the dodo. The good news: at least they won’t be blue