The average woman says she now wears a 34DD-sized bra, according to data from lingerie retailer Intimacy. That’s up from a 34B 20 years ago! (To put that into perspective, that’s the same band measurement, but about three inches bigger around the fullest part of the chest.
2. …But You’re Still Probably Wearing the Wrong Size
About 85 percent of women are, according to Intimacy data. So grab some measuring tape to figure out your correct size, or get a bra fitting with an expert.
3. Most Women Aren’t Happy with Their Breasts
Seventy percent are down on their girls, according to research published in the International Journal of Sexual Health. Of course, most men had no complaints. Play up your décolletage so you feel amazing about it.

4. Breast Action Turns You On
Eighty-two percent of women say it gets them aroused (or more aroused than when the girls don’t get any action), according to a 2006 study.

5. It’s Normal for Them to Hurt While Exercising
In fact, almost one in three marathon runners experiences breast pain, according to a recent study out of the United Kingdom.
6. After All, Breasts Can Move A Lot
So get this: When you run, the twins do, too—in a sort of figure-eight shape. And they can travel up to eight inches, according to research out of the U.K. All the more reason to wear a supportive sports bra! 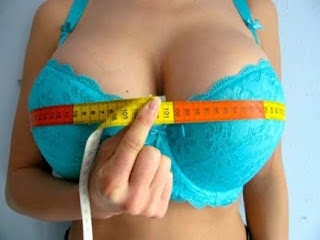 7. They Can Also Be Crazy-Large
The current Guinness World Record for “largest natural breasts” was awarded in 1999 to a woman whose chest measured 70 inches around its fullest part. That’s 5.83 feet!
8. The Twins Aren’t Always Identical
In fact, one breast is usually about a fifth of a cup size larger than the other, on average, according to the book Breasts: A Natural and Unnatural History by Florence Williams.
9. Breast Augmentation Is (Still) in High Demand
It was the top cosmetic surgical procedure in 2012, according to the American Society of Plastic Surgeons. About 286,000 patients had their breasts done last year—although that’s down seven percent from 2011.

10. The Bra As You Know It Is Pretty New
Mary Phelps Jacob received a patent for the “backless brassiere” in 1914, but Ida Rosenthal and her husband William, founders of Maidenform, created the bra with its current sizing standards in the 1920s.