High heels: The Pointy End of a Crippling Problem

High heels: The Pointy End of a Crippling Problem

A real pain in the feet

High heals put stress not just on feet, but on ankles, knees and backs, contributing to a host of chronic problems, many requiring surgery to fix. 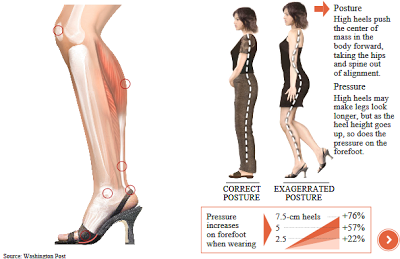 Masochistic torture tools? Women love to love them, but one has to wonder whether high heels were the dream design of a sadist.
The toes are bent back by as much as 90 degrees to the bones in the rest of the foot while the weight of body forces down.

Women will wear their high-heeled shoes until their feet are bloody stumps.

Humans are designed to walk heel-to-toe, not toe-joint-to-heel and by wearing a high heel, “you're altering the position of the foot and how the foot is to function," podiatrist Michael Liebow explains to The Washington Post. "Therefore, lots of bad things happen.”

"Almost 90 per cent of women indicate that they're getting pain within an hour of wearing high heels," says Rob Mair of the Australian Podiatry Association.

Corns, calluses and ingrown nails, the most common conditions treated by Australian podiatrists last year, are just the pointy end of this stiletto-shaped problem.

Numbness, inflammation, tight Achilles tendons and foot deformities are also issues. In fact, nine out of ten bunions (which are misaligned big toe joints) occur because of the shoes women wear – with tight, narrow, high-heeled shoes the main culprit, according to the Australian Orthopaedic Foot and Ankle Society.

"We're seeing atrophy in the the fat pad on the ball of the foot and nerve damage," says Mair, who sees around 6000 patients a year. He says a 20-centimetre heel is the the highest he has seen.

And although the line of the leg may look longer and sexier in a stiletto, they cause the back to arch and the chest to jut forward, affecting posture and leading to lower back pain. "They've been around for a long, long time and fashion will win, but high heels do impact multiple levels of structures in the body," Mair says. "There's a correlation between back pain, neck pain and knee pain."

Figures in Australia are unknown, but Mair expects them to be similarly shocking.
If this wasn't punishment enough, none of this takes into account ankle, knee, elbow and facial injuries, which, Mair says, are not uncommon and are the result of falls.

Despite all this, we continue to wear these symbols of social status and sex appeal. And we love them.
''Women will wear their high-heeled shoes until their feet are bloody stumps,” Liebow says.
With this is mind, Mair says that a small heel - around one-and-a-half to two centimetres - can actually improve posture in both men and women.

There are also ways to minimise the potential impact, he says. Calf-stretching, pelvic and back mobilisation help, as does buying a variety of shoes so that the foot is not constantly forced into the same position.
"Avoid wearing high heels for long periods of time (more than three to four hours) and try not to go for pointed toes," Mair says. "Size is a relative term - look at your posture and your experience [wearing heels]. And visit a podiatrist."