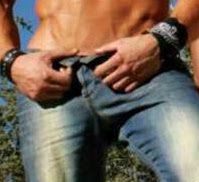 When you want to know what’s up down there, you consult your ob-gyn, friends or the latest “Cosmo” issue. But what if you’re stumped over your partner’s parts? Most women don’t know as much about their guy’s anatomy as their own. What’s the average size? Can it break? Read the gal’s guide to his equipment for answers to 8 common questions...


Is my penis big enough? It’s such an age-old worry for guys that someone actually got out a tape measure and checked. In a laboratory.
The result: Studies indicate that the average guy measures 5.1-5.7 inches when erect and 3.4-3.7 inches when not.
Some penises can appear smaller than they are because fat around the lower abdomen masks their true size; guys can lose the appearance of a full inch for every additional 35 pounds they’re carrying.
It can also be caused by skin on the penis that isn’t securely anchoring the shaft, which means his member retracts when soft.
When it comes to size, remember this: “The vagina always adjusts to the penis," says Ciril Godec, M.D., chairman of urology at Long Island College Hospital in Brooklyn.

2. There’s no need to supersize.

Email boxes are flooded every day with offers to “enlarge your penis” – even if you don’t have one.
“They’re garbage,” says Marc Greenstein, M.D., a urologist with the North Jersey Center for Urologic Care.
Same for penis expansion surgery. One such procedure involves injecting body fat into the penis to thicken it.
Another severs the suspensory penile ligament, which attaches the penis to the pubic bone.
Reputable urologists won’t perform either procedure because they’re not effective and there’s a risk of mutilation, infection and fracture.
Plus, once the ligament’s cut guys lose their ability to steer, which is not good for you.
“The penis just kind of flops; you can’t really direct it,” says Sovrin Shah, M.D., a urologist with Beth Israel Medical Center in New York City.

Still, if you and your partner feel the need to upsize, pick up a penis pump or cock ring at an adult boutique.


They can temporarily increase size by drawing more blood to the area.
3. If it’s morning, he’s erect.

Much as we’d like to think that guys wake up hard because they’re sleeping next to us, morning erections (called nocturnal penile tumescence in the urology world) are really just a holdover from the dreaming or rapid eye movement (REM) phase of sleep.
During REM, neurological activity and the release of hormones like testosterone produce erections.
Some doctors believe that the body’s natural way of keeping the penis healthy is to infuse it with fresh, nutrient-rich blood each night through erections.
Regardless of why it happens, it’s fairly routine.


We’re just awake enough to appreciate it in the morning.
4. If you bend it, it can break.

The corpora cavernosa – the chambers of the penis that fill with blood during erection – are made of connective tissue.
If the penis bends suddenly and awkwardly, the tissue can crack.
“It breaks right in half,” Greenstein says. Fractured penises require surgery to repair and take about six weeks to heal completely.
5. His testes won’t burst if he doesn’t ejaculate.
The truth about this popular ploy for talking us into sex: Arousal without release doesn’t damage his testes.
While it’s true that men’s testicles can expand by 25%-50% during arousal, there’s yet to be a report of testicles popping from lack of climax.

The trapped blood can make the testicles feel achy without the big finish (they may even turn a bit blue as blood loses oxygen), but the only damage done, says Greenstein, “is to men’s pride.”

6. Not hard? It’s (probably) not you.
Equipment malfunctions have a lot to do with how guys treat their own bodies.
Smoking, for example, narrows the blood vessels in the penis, which are already narrow at 0.5-1 millimeter in diameter. Since erections depend on unimpeded blood flow to the penis, any kind of impediment.
In fact, smokers are twice as likely to become impotent as nonsmokers.
Also, having a few drinks to “get you in the mood” can backfire by basically paralyzing the nerves of the penis, according to Godec.
“If there’s no stimulation leading to dilation of blood vessels, there’s no erection,” he says.

The occasional flop isn’t cause for concern. But if your guy’s been more often deflated than elated lately, get him to a doctor pronto. Erectile woes are often the first indicator of serious health problems.


Men with erectile dysfunction (ED) typically develop coronary artery disease within three years and diabetes within eight years.
And if they have hypertension, they’re more likely to have a heart attack or stroke.
“The penis is the thermometer of men’s health,” says Dr. Ridwan Shabsigh, associate professor of urology at Columbia University in New York City.
Check out 10 Health Symptoms Your Guy Shouldn't Ignore.
7. Hair triggers can be handled.

About 30% of guys are quick to ejaculate. But that doesn’t mean you can’t enjoy marathon sex with your guy, as long as you approach the situation diplomatically.
First, raise the issue.

Yes, this will be awkward, but couching it as a conversation about how you can please each other takes the edge off, says sexpert Pepper Schwartz, Ph.D., author of Prime: Adventures and Advice on Sex, Love and the Sensual Years (Collins).


She suggests this opener: “Is there something we can do that can help us last a little longer? I enjoy having you so much, I don’t want it to stop that quickly.”
“This way it’s not all about him; it’s about you as a couple,” Schwartz says.
Once you’re both on board to slow down, there are many ways to apply the brakes.
SSRI antidepressants are often prescribed to help with premature ejaculation. But according to Shah, this buys guys only a couple minutes of extra time.
A better approach may be the “start-stop” method: Your partner gets aroused, backs off before the point of no return, lets things cool down and then starts again.
The idea, explains Shah, is to gradually build tolerance so that with practice he can last longer.

Schwartz also recommends a throwaway round.


“Having a quick session will reduce the sense of urgency,” she explains. Then have a longer session together.
"He won’t be as quick the second time.”
Another exercise: Fool around without intercourse.
“This way he learns how to hold an erection for a while without feeling that he has to do something with it right away,” Schwartz says.

8. Erections can last too long.
There’s admirable staying power... and then there’s too much.
Erections that stick around for 2-3 hours after ejaculation are a sign of plumbing problems.
Erections occur when blood rushes into the penis and the veins snap shut to keep it there, making the penis stay hard. After ejaculation, those blood vessels should relax so the blood can drain out.
If blood gets trapped, erection becomes painful and, if untreated, may lead to impotence. Known as priapism, this condition mainly affects men with sickle cell anemia, diabetes or leukemia.

However, it has been known to happen when guys double up on erection medications to put on a good show in bed.


If your partner's penis shows no signs of returning to normal, swallow your embarrassment and go to the emergency room. In the early stages, docs can use drugs to lower the boom. But the longer you wait, the higher the chances of surgery.
Perplexed By His Penis?
Your partner's penis can do wondrous things, but how much do you really know about how it works? Take this penis quiz to find out.

PS. Share with friends and colleagues and also please add your comments or questions to the comments box below: