The Secret to Getting Him to Commit

The Secret to Getting Him to Commit 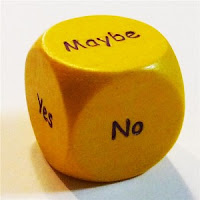 So you think that the man (or woman) you’re dating will never commit to you, because he can’t or won’t, or both. And that you’ll never, ever be able to find a man who will commit to you, because men suck and then you die. Ok. Rewind.
A woman I know from Miami told me about a brief affair she had with a gentleman. They had delicious chemistry and kissed with their mouths open and all kinds of lovely, sexy stuff happened. “But it won’t work out because he’s noncommittal.”
They had just met. How does she know this? She doesn’t. She made up a story that no one would want just her, and then blamed him for it. How would you know someone is or isn’t or could be committed to you after knowing them a week? You can’t.
This persistent idea here — that some people JUST CAN’T commit — is bullshit. Why? Because anyone can commit. It’s a decision, not a personality trait—it involves a specific set of choices and actions that any person is physically capable of making/doing. The only person making early judgments about whether someone is or is not “a commitment person” is you.
Trust me, I know. I was the queen of “What? I can’t even commit to hanging shelves”ba-dump-bump joke. It was a handy story I used to “explain” why I wasn’t in a committed meaningful relationship. As if it were because I wasn’t evolved or mature enough. That couldn’t be further from true. (And it’s not about fate either, as I argued here.)
Fact is, you can get anyone to commit. It’s not rocket science. I’m going to use the clichéd/stereotypical “he” here for simplicity’s sake, not because it’s always true, but I hear this most from women about men.
To get a man to commit, you need to do two things:
Rock his world.
Make him earn it.
I told you this wasn’t rocket science. How could it be that simple? It is. It’s just that you’re not doing it.
Let’s break it down, shall we?

This is a critical first step. If you can’t blow his mind, he’s not looking to commit to you. Why would he? Because you think he should? Nope. He has to want to be with you and enjoy your company and feel pretty fucking awesome around you. And you should feel that way, too. Yes, you have to be at your best. Not perfect, because no one is. But you’ve got to bring your A game.
You must teach him how to treat you, so that he has to initiate, make an effort, and earn the thing he wants. And I don’t just mean sex, because you can get sex anywhere. I mean the great stuff he loves about being with you.
And the same goes for you. If you even consider committing to someone whenyour world hasn’t been sufficiently rocked, then you’re in for a very long haul. Plenty of folks commit out of pressure, or a sense that it’s what they “should” do. Don’t let this be you. Commitment with love = an easy decision. Commitment without love = a jail sentence.

Once you’ve rocked his world, you don’t then give away the keys to the store. You don’t say, “Ok, I rocked you, now pay me back with your lifelong commitment.” That won’t work. You show him that he mustearn that privilege. And keep earning it.
(If you’re not sure what I mean, find out why “you go girl” thinking is the worst advice.)
I’m not talking about berating, withholding, or any other mind-fuck thing we all despise. I mean you must teach him how to treat you, so that he has to initiate, make an effort, and earn the thing he wants. And I don’t just mean sex, because you can get sex anywhere. I mean the great stuff he loves about being with you.
Too many women get clingy and fearful and needy, and end up rewarding the very behavior they hate. As soon as a guy backs off or seems uninterested, she starts to deluge him with texts, show up at his apartment, go into overkill mode trying to “win” back his attention and affection. When you do this, you give the power away. You’re saying, “I’ll do anything for this, and you don’t have to do a thing.”
Wrong. He needs to do something. He needs to feel he’s earning what he wants. That’s how he knows it has value!
And this was Barb’s undoing: She compromised what she wanted off the bat by letting him know she was down for “whatever,” and we all know what that means: noncommittal, anytime sex without strings. Fine, if that’s what you want. But it wasn’t really what she wanted. She wanted a committed meaningful relationship. She lied, and sold out on what she really wanted, in order to make him like her. She was going low-rent on him, hoping he’d come back.
No surprise, he’s gone.
Men don’t want it easier. They want to know that what they’re going after is worth their time. I’m far more committed to something I’ve invested in than something that was lobbed at me.
This also doesn’t mean you won’t get rejected along the way (read why this is really important). But when you can really wow someone and then make him come back for more, you win.
Men don’t want it easier. They want to know that what they’re going after is worth their time.
This worked for me. I started dating a fella in the fall who was fresh out of a 6-year relationship, who said he was unlikely to call anyone his girlfriend anytime soon. I didn’t say, “Oh yeah, buster, well you better decide now or I’m out!” I didn’t say “Oh, well, it’s fine — I’m down for whatever.” I didn’t force him into having The Talk (read why to avoid this). I really just liked the guy. So I made sure that I blew his mind and made him earn it. I didn’t crowd him, barrage him with emails, or ask incessantly about how he felt about us. I did my thing, kept my life going, and made it clear if he wanted to see me, he had to let me know. When we were together, I made him feel like a million bucks.
And he kept showing up. Six months later, he spends most evenings with me, cooks me dinner, and invited me to his best friend’s wedding (which is three months away). Over the holiday weekend, he took me on a romantic road trip, during which he whispered in my ear the words we all want to hear a man say.
Over dinner one night, I said, “So it sounds like I’m kinda your girlfriend now.”
“Yup,” he said.
So yeah, it works. Sure, we’ve had a few crossed signals along the way, and I’ve had my share of insecurities. Does this mean we’ll be together forever and ever? Who the hell knows. But the decision to be committed to a relationship is a choice you keep making in the present, which is where you always are.
My point is, this isn’t a trick you pull to “get” someone to commit, and then stop. Because the day you stop is the day you give up. It’s the way you live your life together—and can you think of a better way than to continue to impress and engage and deserve each other? I can’t. The key is to practice that NOW, not so you can stop doing it when you find someone, but so you can really start.
Read the original article here

AD: find out who's looking for a fish like you here...

Email ThisBlogThis!Share to TwitterShare to FacebookShare to Pinterest
Labels: date, dating, find a man who will commit, fish 2 fish, fish2fish, fish2fish.co.uk, fish2fishdating.co.uk, getting him to commit, make him earn it, men suck, rock his world