Did one more guy you thought was The One turn into The One Who Got Away? Don't despair: The situation isn't hopeless – and neither are you! But bad dating traits may be ruining your happy ending. From page-long must-have lists to oversharing too fast, learn how to break 9 bad habits...

You want the big relationship − where you get your mail at the same address, plan vacations

a year in advance and have inside jokes and nicknames.

Yet, despite a string of promising relationships, you’re still not partnered up. Sure, it could be the duds you’re meeting. But if all your romances crash and burn – or first dates

don’t even make it out of the gate – it’s time to question if you’re driving them off.

So what is it? Read on for the 9 dating don’ts that could be sabotaging your love life:

1. Your must-have list is pages long.
Your dream man

may be a 6-foot-tall doctor who never forgets an anniversary and loves to go shopping with you. Good luck with that.

When sizing up someone’s partner potential, your image

of the “ideal man” could be shutting your eyes to a great guy, even though he doesn’t meet all your requirements.

“When people have so many ‘I just can’t have guys who...’ deal-breakers, I think, This person’s going to be lonely,” she says. “No one likes trying to fit a checklist.”

. But if he’s not the right height or doesn’t drive a hybrid, maybe that’s something you can live with.

Focus on things that are truly non-negotiable. Then do your love life a favor and relax about the rest.

we meet a front-row seat to the show.

That anger and bitterness is a big turnoff, and it can keep you from being ready for a new relationship.

“If the other person is still occupying that much of your thought process, you’re still mentally in a relationship

with him, even if you’re no longer together,” Resnick says.

Dating do: Even if you’re not yet over your ex, keep those issues out of conversations with new men you date and stick with lighter topics – sports, movies, how much fun you’re having on the date – in the beginning, Schwartz advises.

3. You overshare too fast.
Sure, anyone who’s a big part of your life

should know everything about you, including the serious stuff − cancer, business failure, a special-needs child. But making a full disclosure about challenges you’re facing before you even know if the relationship is a keeper can guarantee it won't be.

do this out of an excess of honesty or because they think the guy ought to know and deal with it.”

And, of course, he should − eventually.

Dating do: Don’t unpack all your baggage on the first date

“Let the guy get to know you as a sensual, happy, sexy woman,” Schwartz says. Once he knows, he’s more likely to want to go the distance.

“But if he hasn’t gotten to that point, he’s thinking, Do I really want to do this?” Schwartz says.

isn’t likely to get you to happily ever after. 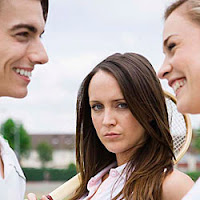 “Women always think, I’ll be the one to change him,” says Jill Murray, Psy.D., a psychotherapist in San Juan Capistrano, Calif., and one-half of the Internet radio show “The Dr. Jill and Judge Pam Show.”

“Annette Bening did a really good job with Warren Beatty,” she says. “Women

always look at these one-in-a-million [examples] and think, That could be me.”

Yes, it could, but if you’ve been down this road before and it always ends in heartbreak, it probably won’t.

Dating do: If unavailable guys are a pattern, it might be you who’s afraid of commitment, not the men you’re meeting.

“If you can’t pick another kind of guy, that says you don’t really want a partner,” Schwartz says.

If you truly want a relationship, look for signs that the guy you’re seeing won’t commit. And if you find them, vamoose, Schwartz says. Plus, see a therapist to help

you work out what’s behind your fear of commitment.
Then again, soul-searching may help you realize that a genuine relationship isn't your cup of tea. That’s fine too – knowing that will help you enjoy your time with Mr. Right Now.

If you’re the type to call your man 24/7 and crash his guys night because you “missed him,” beware: Men are like bloodhounds when it comes to sniffing out insecurity and desperation.

“If you don’t feel comfortable

being alone, or OK if you’re not in a relationship, guys pick up on that insecurity and find it really unattractive,” says New York City relationship therapist Michael Batshaw.

Dating do: Get a life. When you have your own friends and activities, it shows him you’re secure enough not to be with him 24/7. Plus, it’s scary for a guy to feel like he’s your whole world.

“That’s too much pressure,” Batshaw says. “Especially in the beginning, a guy wants to get to know someone without feeling like she’ll kill herself if he doesn’t want to be in a relationship

too soon.
If you’re used to casual hookups, that love ’em-and-leave ’em attitude may hurt when you want something deeper.

“If you’re intimacy-phobic or more comfortable

sleeping around, you might not know how to let something deeper develop or recognize it when it comes along,” says Miami marriage and family therapist Lisa Paz, Ph.D.

On the flip side, jumping into bed before real feelings develop may make you more attached to a guy. That, too, is a relationship killer.

with someone too soon can inflate expectations and set the relationship up for failure because the guy’s not ready for that.”

Dating do: The fix is easy: Wait. Novel, huh?

Batshaw recommends delaying sex for three months with a new partner to find out if you’re interested in him, if you’re compatible (aside from the smokin’ chemistry), and if he’s looking for something more too.

“If you’ve been dating a guy for three months and you haven’t had sex, you know that he's interested in you,” Batshaw says.

7. You’re hooked on relationship drama.
There’s a good reason we get caught up in dramatic relationships with unpredictable bad boys: They’re actually addictive, according to psychotherapist Murray.

“These relationships are stressful and anxiety-provoking, so you’ve got cortisol and adrenaline [hormones] running through your system all the time,” Murray says.

The fabulous sex that follows provides a surge of oxytocin, the “feel good

” hormone that cements the bond, Murray says. “You’re addicted to the brain rush.”

So it’s no surprise that it’s harder to get excited about a nice man who calls when he’s supposed to and treats you well.

this roller-coaster addiction of chemicals and you think, Something’s wrong, I’m not attracted to him,” Murray says.

Dating do: Breaking this cycle often takes introspection and outside help.

A therapist can help you improve your self-esteem and delve into any childhood relationships − such as with an absent or dismissive father − that may be at the root of this behavior.

8. You think you can change him.
You may have the best intentions in wanting him to stop smoking, eat fewer burgers, drink

less beer or get a better job. After all, it’s so he can live a longer, healthier, more lucrative life with you. But if you push for changes he doesn’t want, you’re in for a world of hurt.

“He’s either going to revolt, withdraw or submit,” Resnick says.

If he revolts and you don’t see the error of your ways, the relationship

will end, he says.

“If he withdraws, you’re going to wonder why he’s not as affectionate and loving − and it’s because you’ve beaten it out of him,” he says. That probably won’t lead to a lasting relationship, either.

Even if he submits, you may end up being less interested in the new-and-improved version.

up, at which point, congratulations: You’ve killed his spirit,” Resnick says. “And you’ll start to resent who he’s become because you’ve blown out the spark that drew you to him in the first place.”

Dating do: Talk with your guy about why you’d like him to make a specific change, like not smoking, and see what he’s willing to do.

“Give the guy a chance to talk about why he’s this way, why he doesn’t or might want to shift, but it’s going to take some time,” Batshaw says.

If he’s happy the way he is, then decide whether you can live with it or not. If you can, stop nagging; if not, say adios.

9. You mistake cooling passion for goodbye.
Maybe you don’t smile anymore when he calls. Or you think about him only 23 hours a day.

tell me all the time: ‘I knew it was over when I stopped getting butterflies when I saw him,’” Paz says. “That’s not over. That’s when a relationship starts.”

, because that hormonally-driven euphoria is simply an early attraction phase − and it’s naturally short-lived.

“After a certain amount of time, we can’t physiologically maintain that feeling,” Paz explains. “Chemically, the butterflies run out.”

And yet, if you’ve been reared on a steady diet

of romantic comedies, you can be excused for believing the fantasy that “happily ever after” means falling, not staying, in love.

Dating do: If you want a bond that outlasts the butterflies, you have to roll with the hard − and boring − stuff.

“The goal of a relationship isn’t to get over the humps and live happily ever after,” Batshaw says. “It's to become so good at working through it that when conflict comes up, you resolve it quickly.”

What’s your reward for sticking around and resolving those conflicts?

“That kind of soul-mate and deep sexual connection that you can grow over a lifetime,” Batshaw says.